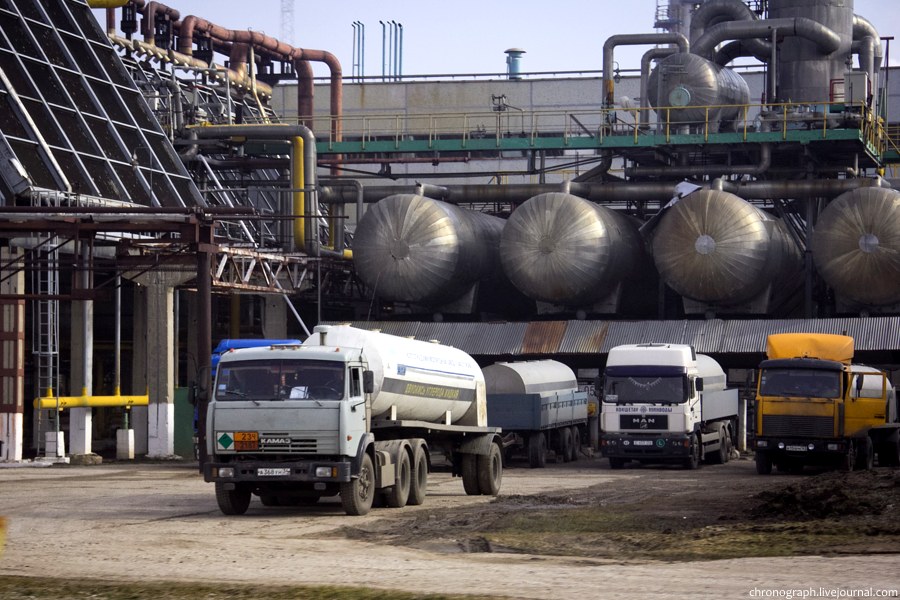 TogliattiAzot is a well-known chemical company in Russia that produces a large amount of ammonia each year. Its headquarters are based in the city of Tolyatti in Russia. The major ammonia plant started working in 1979. There is an ammonia pipeline that joins Tolyatti with Odessa. This is the longest ammonia pipeline on Earth and it’s operated by Transammiak. At present, a marine ammonia terminal is being constructed at Port Taman in Russia.

TogliattiAzot has been providing vital social programs and services to Tolyatti in full extent within the past 10 years. Only in 2011, the company contributed over three billion rubles ($100 mln.) in taxes to the country’s economy, so it received the “Best Taxpayer” award. In 2015 TogliattiAzot hold the 181st position on “Expert 400”, Expert magazine’s annual list as one of the largest companies in the country, and the 188th position on RBC magazine’s list of 500 largest companies in the country.

History of the company

Construction on the first nitrogen plant on the territory of TogliattiAzot started in 1974. The plant and the factory were the part of a joint project between the Soviet Government and Occidental Petroleum. In the 1970s the Togliatti-Odessa ammonia pipeline was built with the length of 2,471 km right.

In August 1983, the plant produced the first amount of liquid carbon nitrogen for further shipment. In 1985 the first unit for the production of urea-formaldehyde resin was put into operation. Chemico constructed four of seven Tolyatti ammonia plants. Two more urea processing plants were built in the 1980s. They can boast a combined production capacity of 480,000 tons per year.

In 2012 the company started a modernization project containing a “major renovation” of TogliattiAzot facilities and upgrading the manufacturing process. The eight-year plan also included the upgrading of all seven ammonia plants and air compressors, as well as changing of the only reaction tubesandheat exchangers into new ones.

Ammonia – The company produces up to 3 mln. tons of ammonia per year. Ammonia unit AM 76 was fully automated by Honeywell in the end of 2015 last. In 2001, The European Bank for Reconstruction and Development gave TogliattiAzot a loan for $40 million for increase of ammonia production.

Urea – The construction of a new Urea plant was started by TogliattiAzot in 2015.

Liquid Ammonia – In 2014 the total output of liquid ammonia was 2.9 mln. tons. In 2015, Houston based KBR Inc. was awarded a contract to fix the existing seven ammonia plants in Tolyatti.

Urea Formaldehyde Concentrate (UFC) – The development of this material was patented by the company in 1998. TogliattiAzot produces two grades of UFC at the factory at Sheksninsky: resin base and granular nitrogen. In 2006, a 25,000 ton UFC facility was opened. It has increased the production capacity to about 40,000 tonnes.

Carbonic Acid – is produced in the liquid form.

Basalt Fiber and Film – Strong basalt fiber is used as a non-flammable thermal insulator. It’s produced and used by all plants of the company.

Refractory Materials and Frit – refractory materials are produced by TogliattiAzot in cooperation with Austrian firm Plibrico.

Ceramic Production – the company features a great brick making factory in Toylatti that is able to produce 60 mln. bricks per year.

Consumer Goods – The company owns a plant producing such consumer goods as home and office furniture, windows and door frames. These goods can be bought not only in the Samara region but across the country.

Togliattiazot.care is a project of the company that carries great social responsibilities. TOAZ does not only produce chemicals but also cares for people by providing a wide variety of social programs to their employees, city’s community and people of the Komsomolsky district in general. TogliattiAzot contributes to the development of healthcare facilities and helps underprivileged people regularly. The company’s projects are meant to improve the social sphere by assisting Togliatti orphanages, city Hospital, adult day care center, Rehabilitiation Center, religious institutions and charity funds.

TogliattiAzot offers a grant program to families with adopted disabled kids. It was implemented in 2013 as a result of common work of TOAZ administration, its employees and the trade Union organization. The Board of Directors supports the grant program, due to which families who have adopted disabled children, orphans, or children left without parental care can get the funds until a child reaches the legal age. This grant program applies to those who have adopted children in the Samara region only.

The adoptive family can use the provided money for the reconstruction of the child’s living space, their rehabilitation and traveling, as well as buying the needed medical equipment, for taking care of the kid in the postoperative period, etc. In this way, the program functions in a few ways: it simplifies the search of new families for children with disabilities and helps adoptive families to take proper care of the child. There is a special Commission that monitors correct implementation of the grant program.

TogliattiAzot has developed a durable socially-oriented program according to which it provides sponsorship and charity help in the Togliatti and Samara regions. The company has also created lots of educational and cultural projects. Some of them focus on the regular promotion of the broadening of theatrical and musical art in the city of Togliatti. The company initiates its projects by involving regional and federal partners. Its House of Culture was opened in 2000. It has become the main destination for spending free time in the city as well as the leading venue for sports, educational and cultural events.

“Chemistry of Words” is a special project that was launched by TOAZ in September 2017. The educational club operates on a free basis and takes place in the House of Culture in Togliatti. Local people have a great chance to attend seminars and lectures held by leading Russian science journalists, scientists, artists and psychologists. There are two lectures each month from the beginning of autumn to the end of spring. They may involve the following topics: biology, chemistry, anthropology, medicine, neuroscience, psychology, linguistics, literature, and art. The citizens have an opportunity to get essential knowledge and to meet new friends, as well as to discuss their life experiences with others, exchange opinions, and improve the position of the Komsomol district of Togliatti on the country level. This district is known to be home to numerous TOAZ employees within many years.

“Impulse” is a scholarship art program that was launched by TogliattiAzot with the help of the Togliatti Philharmonic and the charity fund “Not Indifferent”. The goal of the program is to continue the development of the city’s cultural life by financially supporting perspective people. “Impulse” has successfully functioned since 2017. Its fund is based on ticket sales to concerts and of famous Russian and foreign artists. Those events are held on a monthly basis at the House of Culture under the supervision of the program’s organizers.

Until 2019 the program involved only students from musical educational institutions, but in 2020 the program has expanded and now attracts students who deal with different arts such as painting, theater, choreography, singing, etc. The winners of the program receive a monthly scholarship from September to May. They are chosen by the special Council based on their results in the competitions.

The management of TOAZ launched the first support program for those over 50 in July 2018. It’s obvious from its name “Chemistry of Skills” that the program intends to improve the professionalism of individuals of pre-retirement age in certain activities. Any resident of the Samara region can benefit from the program and get new skills or to develop the existing ones absolutely for free. This developing program is financed by Togliattiazot in the full extent.

The project does not only offer a chance to learn something new to all people who want this but also to get employed. One can gain knowledge in the following areas: foreign language, IT technologies, and the basics of entrepreneurship. These courses can significantly increase one’s career chances. The program also involves workshops that help to adapt to altering economic conditions. The workshops are conducted by the leading experts in the spheres of personnel management, polytology, psychology, economics, etc. Being part of the courses allows the participant to develop their professional skills, increase their social status and level of activity, promote their individual growth and career, as well as to develop their own business.

There is definite expert council that consists of representatives of TOAZ who are responsible for the development of different projects during the year. They are supported by the local authorities, Togliatti and Stavropol regional administrations, regional organizations and public figures. The goal of these projects is to solve problems in the fields associated with the social protection of citizens, their education, cultural development, involvement in the science, physical culture, art, education, environmental initiatives, and mass sports. “Chemistry of Kindness” pays special attention to comfortable urban environment and supporting volunteer movements. Those who have developed their own projects can win grants of to up to 400,000 rubles.

TOAZ is actively pursuing a policy to promote the priorities of a healthy lifestyle and the development of amateur sports. The company has formed teams in hockey, ball hockey, tennis, volleyball, basketball, futsal. Multisport competitions are held at the factory. Every year, there is a bike ride from the production site to the Palace of Culture in the Komsomolsky District.

TOAZ supports the Samara Region Basketball Federation with the goal of developing this sport in the region. Under the auspices of the company, a regional tournament among amateur teams is held. It’s known as the Togliattiazot Samara Region Championship. Every year in spring in Togliatti, the TOAZ 3×3 street basketball cup is held. That’s a significant regional tournament that is gaining more and more popularity among the residents of the region. The company also acts as the general sponsor of the Samara Open basketball tournament in Samara, where more than 200 teams from all over Russia perform.

Help to those in need:

Being a city-forming enterprise, TOAZ constantly supports categories of citizens in need. Such support is provided on the principles of targeting, efficiency, and transparency. The company pays special attention to programs with a long-term effect and wide coverage, such as:

One of the main investment projects of Togliattiazot is the construction of a terminal for transshipment of liquid ammonia and urea in the port of Taman on Cape Zhelezny Rog. The corresponding agreement was signed with the local authorities. In October 2015, TOAZ announced that the network schedule for completing the construction of the complex was agreed by the Federal Agency for Sea and River Transport, Federal State Unitary Enterprise “Rosmorport” and approved by the Ministry of Transport of the Russian Federation. The complex is included in the federal target program “Development of the transport system of Russia until 2020”. The terminal’s first phase started working in 2017; the commissioning of the second phase is scheduled for 2020. The total investment will be more than $300 million. The project is fully funded by TOAZ.

In terms of other spheres, the administration of Togliattiazot plans to continue developing and supporting existing social and educational programs, as well as to create new ones in order to improve the life of people in the city and region.

For TOAZ Togliatti is a native and beloved city. Thousands of factory employees live there. It is important for the company to provide a comfortable environment in the city at all levels: social, material and cultural. Therefore, the company is actively involved in the comprehensive development of the city and the region. TogliattiAzot is not only a successful chemical enterprise but also a socially responsible organization that takes care of people over 50, supports families raising disabled children and provides financial grants to hundreds of talented students in the region. TogliattiAzot annually sponsors local and international environmental programs, the Tolyatti hockey club “Lada”, the Samara basketball club “Red Wings”, and FIDE.

How to choose the best platform for your desired thermal wear?

How to calculate winning numbers?

Tips and Tricks to Choose Right Weighted Vest for You